Tanzania Standshines at ITB with the early human footprints among countr’s tourist icons. 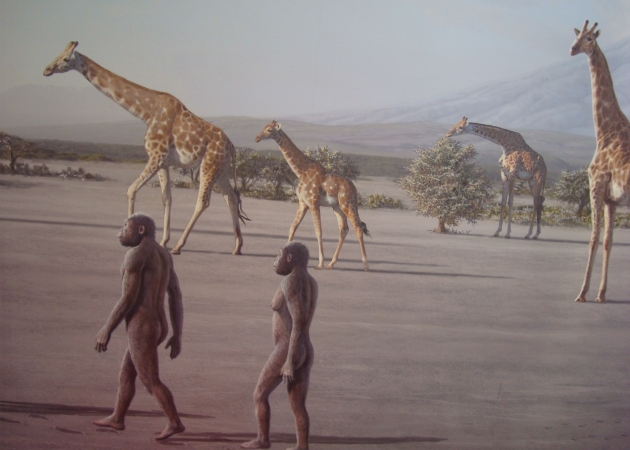 TheTanzania stand at the ongoing 2017 tourism event of InternationalleTourismusBorse popularly known as ITB continuous to attract many visitors among other things following the displaying of excavatedLaetoli footprints of early humanswhich Tanzania Tourist Board has picked as a special promotional agenda of destination Tanzania in this year edition of ITB.

Together with other legendary tourism icons of the country such as Mt. Kilimanjaro, animal migration in Serengeti National Park, Ngorongoro crater, to mention only few, the hominin footprints and its unique history has impressed more visitors who flock at the Tanzania pavilion and have shown a keen interest to witness the abundant tourism attractions Tanzania is endowed with.

According to the Managing Director of Tanzania Tourist Board (TTB) Ms DevotaMdachi the participation of TTB in this year show is with among others the emphasis of the proof that the origin of humans being is in Tanzania a phenomenon which she said is also a great tourism icon for our country that we are proud of.
“The Laetoli Footprints as it is the case for the fossil discovered in Olduvai Gorge provides convincing evidence of early human in Tanzania, and we are pleased that the displayed excavated footprints and drawings have been attracting a number of expo visitors to ourstand. This is the truth that we want people around the World to know.” noted MsMdachi.

Tanzania has this year registered 61 Private and Public institutions showing up in the Tanzania pavilion under the coordination of Tanzania Tourist Board. Institutions from private sectors include Tour operators, Travel agents, Hoteliers and so on, whereas from Public sector are Tanzania Tourist Board, Tanzania National Park, Ngorongoro Conservation Area Authority, National Museum and Zanzibar Commission for Tourism.
Team Tanzania to this event is under the Minister for Information, Tourism, Culture and Sport of the Revolutionary Government of Zanzibar Hon. Rashid Ali Juma. Other dignitaries includeAmbassador of Tanzania in Germany H.E Philip Marmo, Deputy Permanent Secretary for the Ministry of Natural Resources and Tourism Dr. AloyceNzuki, and the Chairman of Tanzania Tourist Board Judge (Rtd) Thomas Mihayo.

ITBwhich the biggest tourism event in the world,kicked off on Wednesday 8th March, 2017 at Messe Berlinand is expected to come to an end on 12thMarch 2017. According to organizers, the event has this year attracted about 187 countries from all over the world including Tanzania.