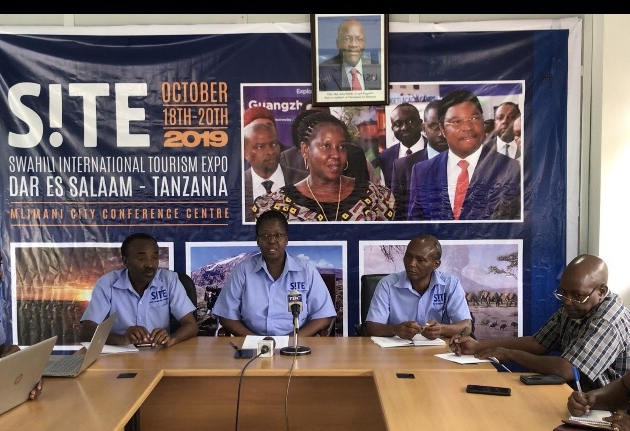 The fifth edition of the Swahili International Tourism Expo (S!TE) will this year be held from 18th – 20th October, 2019 at Mlimani City Conference Centre in Dar-es-Salaam, Tanzania’s commercial capital located along the coastline of Tanzania, East Africa.

S!TE which focuses on inbound and outbound travel to Africa is expected to draw hundreds of tourism and travel professionals from all over the world and will take the format of a travel and trade exhibition with a conference element focusing on topical tourism, sustainability, conservation and other market

Speaking at the press conference today in Dar es salaam, the Managing Director of Tanzania Tourist Board Devota Mdachi said that unlike last year S!TE 2019 is expected to attract 250 exhibitors and more than 400 hosted buyers and journalists from different countries such as USA, Italy, UK, Russia, Germany, China, Singapore, Uganda, Seychelles, Mauritius, Kenya, Rwanda, Sweden, South Korea, Malaysia, India, South Africa just to mention but a few. Last year’s exhibitors were recorded at 152 and had about 335 tour agencies worldwide.

She further said that apart from exhibitions there will also be other programs meant for the purpose of creating more awareness on tourist attractions Tanzania has to offer and other tourism related services. “There will be FAM trips for hosted buyers organized by TTB in collaboration with other tourism stakeholders to showcase the southern tourism circuit of Tanzania, the historical city of Tanga, Mafia Island and the pristine beaches of Zanzibar”. Ms. Devota added that there will also be seminars presented by tourism experts from around the world on various topics including modern ways of promoting and marketing destination Tanzania with insights on how to penetrate the Chinese and Indian market.

The expo will make a good platform for tourism promotion and create vast opportunities for small entrepreneurs to showcase and sell their products and services. Entertainment from different traditional groups and live performance of a talented Tanzania musician Peter Msechu and the Msechu Band will be part of the show.

The TTB Managing Director called upon for Government and private institutions to support the expo by extending sponsorship in different categories so as to make it a success.